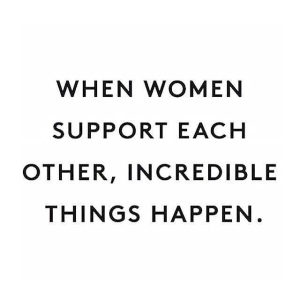 Behind every successful woman is herself

As a woman, I’ve learned a lot of valuable life lessons growing up: Always keep Tylenol in your purse, always squat-test your pants and never settle for anything less than what you’re worth.

But the biggest lesson I’ve learned is that there’s a very important difference between commanding and demanding respect and as a woman, it can be very confusing to decipher the two.

Commanding respect is about the actions of how you carry yourself. It’s about how you speak not only about yourself, but also about others. You teach people the way you should be treated.

The way you talk and think about yourself just creates a narrative of how you’re perceived by others. If you confuse empowerment with sexuality, I think you’re going about it the wrong way. Calling other women whores opens the door for society to think that’s how women should be perceived. Women a lot more than just sexual objects: they are doctors, they are lawyers, they are engineers and they are just as valuable as men and should be treated just as equal.

We live in a time where women are no longer silenced, but rather we can shout out from the rooftops and let our voices be heard. Millions of women over the years have paved the way for us to have a fair shot at life and as we grow up, it’s time to instill these new-found fundamentals to the next generation.

Growing up, I recall having a few friends who would negatively talk about other girls. Instead of finding a redeeming quality, they would quickly pick the first thing they noticed wrong about them: “She’s fat”, “Look at how dumb her shoes are”, “What a slut”.

A while back, I read a quote that really resonated with me. “Real queens fix each other’s crowns,” and I have never resonated with something more. All women come from several walks of life, different upbringing and different cultural norms. What makes women strong is being able to see another woman, and rather than belittle her or feel threatened by her, she is willingly to empower her to be reach her best self.

With all this said, I’ve decided to take a pact. From now on, I’ve decided that instead of belittling women or talking with a negative connotation about them, I’m going to start empowering and spreading kindness like confetti.

If you see a woman doing something influential, tell her! If you like a woman’s outfit, tell her! If you want to expand your social circle because you feel this particular woman could benefit you, tell her! We have these voices and it’s so important to empower one another. Create that army of lady bosses for yourself, surround yourself with good vibes only.

Here is to strong women: may we know them, may we be them and may we raise them.

This site uses Akismet to reduce spam. Learn how your comment data is processed.