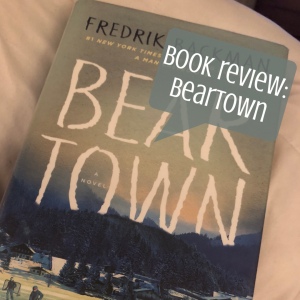 There are fewer things better than when you discover a book that completely captivates you, challenges your thought process and makes you question your own life and actions.

If you’re looking for something that combines all three, then I highly recommend Beartown by Fredrik Backman.

When I picked up Beartown, I was anticipating reading a story about a hockey team on the brink of success in a dilapidated town, but what I actually got out of Beartown was anything but that hockey team, but rather how a dream can come barreling down when the truth comes out.

Beartown took me to a place that felt familiar because it reminded me a lot of my own hometown. The residents of Beartown pride themselves and believe that the future is instilled in the junior hockey team, who is one game away from putting the sleepy town near the forest on the map by competing in the national championship.

The future of the town rides on the shoulders of Kevin, a hockey prodigy destined for the National Hockey League. When emotions get high, things turn violent as he rapes Maya, the daughter of Peter, the general manager of the team.  The day of the national championship game, Maya confesses of what happens and has Kevin hauled off the bus, leaving his team to their own devices to win it for Kevin.

Quickly the town becomes angry, betrayed and vengeful towards Maya, simply because the future of Kevin will be drastically hindered because no NHL team will want him and his baggage. The residents truly believe that their own boy isn’t capable of doing something so heinous and malicious, that they claim that Maya must have been jealous.

Maya has to learn to live with the darkness, because Beartown is a hockey town and the residents won’t stray against their own.

Backman has a way of triggering your emotions and envoking thoughts with his style of writing. A quote that really stuck out to me was ‘Hate can be a deeply stimulating emotion. The world becomes much easier to understand and much less terrifying if you divide everything and everyone into friends and enemies, we and they, good and evil. The easiest way to unite a group isn’t through love, because love is hard. It makes demands. Hate is simple.‘

There are so many angles of this story in a sleepy town that it really engrosses you and makes you feel as if you know these characters personally: Benji, the team’s enforcer with a secret when he finds someone that’s ‘tequila and champagne at the same time’; Amat, the kid who comes from the Hollow and skates morning and night to earn a spot on the team with his speed; Bobo, a kid who knows his hockey career is over beyond this team and Philip, a kid who does what is asked of him, giving it all.

As a hockey fan, I really loved the analogies and connections to the sport I’ve grown up around. I think Backman hit it on the head when he said ‘Hockey is a simple sport: when your desire to win is stronger than your fear of losing, you have a chance. No one wins when they’re frightened.’

There’s honestly no shortage of quotes in this story that can be used in a plethora of scenarios, not just in a sports’ light: ‘You never stop being scared from falling from the top, because when you close your eyes, you can still feel the pain from each and every step of the way up.’

Without spoiling it, I am very glad to see how this story ended. It completely caught me off guard and it made sense when you pieced it. Backman had an incredible way of connecting it together and I quickly became a fan of his style of writing because his story bleeds with authentic, raw emotion.

I have recommended this story to hockey fans and non-hockey fans alike because this isn’t a story about hockey: It’s a story about people. I was even more elated to see that Backman has another installment of this series coming out very soon (June 5!) and I immediately added it to my To-Read list.

This site uses Akismet to reduce spam. Learn how your comment data is processed.